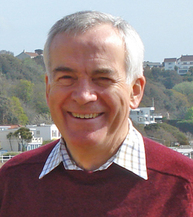 Colonel Martin Amlôt
Martin Amlôt was appointed Deputy Lieutenant in 2000 and was High Sheriff of Merseyside for the year 2012-2013.

He was educated at the King's School Chester and the Royal Military Academy Sandhurst.  He served with the King's Regiment and in Army staff appointments in Great Britain, the Caribbean, Germany, Canada, Norway, Hong Kong, the Falklands, Kenya, Ulster and the United States.  He was Second in Command of 1st Battalion the King's Regiment in the late 1980s and he commanded the Territorial Army Battalion of his Regiment during the post Cold War 'Options for Change' reorganisation of the TA.  He was appointed OBE at the end of this tour.

His last regular army posting was as Secretary to the Commanders in Chiefs' Committee (Germany).  He left the Army in 1994 and became a Civil Servant in the Ministry of Defence, running the home headquarters of the King's Regiment.  In 2006 the Duke of Lancaster’s Regiment, a new, much larger Regiment was formed.  Martin Amlôt was appointed to run the home headquarters of the new Regiment.  At the end of 2011, he retired from the Ministry of Defence Civil Service.

Despite holding a busy Civil Service appointment, he also found time for youth work, becoming Commandant for five years of the fifth largest Army Cadet Force County in the country . He has chaired the regional Army Cadet Force Public Relations and Recruiting Committee and was Deputy Chairman of the Regional Joint Services Cadet committee. He became a governor and a trustee of the Royal School for the Blind Liverpool, where he is now Chairman of the Board of Rushton Futures, a facility for young adults post 19 years old with multiple disability and visual impairment. He was Chairman of the Committee of the Merseyside and Deeside Outward Bound Association, Chairman of a national working group set up to reorganise the volunteer arm of the Outward Bound Trust; Director, then Commissioner and finally Commander of St John Ambulance Merseyside until late 2011.  For a time he was Chairman of Governors of his local village school and a member of the Parochial Church Council.  He is a Member of the Foundation of Liverpool College.  He was appointed to the honorary rank of Colonel after his TA service as ACF commandant.

Martin Amlôt served as a member of the Council of the High Sheriffs' Association of England and Wales for six years.  At the end of his year in office as High Sheriff he was invited to become patron of Sefton Council for Voluntary Service and patron of the Friends of the Observatory School in the Wirral.

Martin was widowed in 1987 and later married Daphne; Martin and Daphne Amlôt live on the Wirral. They have two sons from Martin's first marriage and two grandchildren.  His tours in Germany gave him the opportunity to teach his wife Daphne to ski, having himself learned in Norway at the Army's expense at the end of the 1960s. Skiing remains a passion for them both and Martin has wide interests, having enjoyed fine arts, hill walking, church bell ringing, web design, photography, nature, and an amateur but keen interest in geology. He is a Council member of the Liverpool Geological Society and the Treasurer of the Arts Society Wirral.