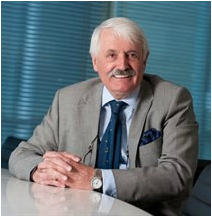 
Born in London at St Mary's, where his parents met as a young doctor and nurse, he came to Merseyside aged 6 when his father took up a medical appointment in Liverpool.
Educated at Liverpool College with his two brothers, Jim Davies enjoyed his time there rather more on the sports field than in the classroom which resulted in his leaving school without the offer of a university place! Medicine was out as he couldn't master sciences and as he talked a lot it was felt the law was the natural career to pursue!
He gained five-year articles with Layton & Co where he met his lifelong friend Guy Wallis and, after they both had five great years with Peter Bullivant, later as Partners, they left in September 1977 to set up Davies Wallis & Co in Liverpool. Today DWF Law LLP has
32 offices worldwide with some 4300 people. In March 2019 it became the first law firm to be listed in the main market on the London Stock Exchange.  Jim remains a consultant with DWF.
After Jim Davies' elder daughter was seriously ill and treated so brilliantly at Alder Hey, he became very involved first as a Director between 1991-1996, then as Trustee of the Rocking Horse Appeal and later as Chair of the Imagine Appeal, between 1998-2013. He was also a Founder Trustee of the Merseyside Bone Marrow Transplant Trust and later became a Trustee of the Roy Castle Lung Cancer Foundation.
Always passionate about the Arts, especially on Merseyside, Jim Davies chaired the Merseyside Artists' Exhibition in the early 1990s and then joined the Tate Liverpool Council between 2005-2011. Later he became a Chair of Tate Liverpool Development Committee and remains strongly committed today. He is a Fellow of the Royal Society of Arts.
He was a Director of Liverpool and Merseyside Theatres Trust Limited 2008-2014 and says it was wonderful to see the new Everyman built (and win the Sterling prize!) under the inspired leadership of Deborah Aydon and Gemma Bodinetz.
Jim was appointed a Trustee of Liverpool John Moores University in 1999 until the Trust Board ended in 2008 and was awarded an Honorary Fellowship in 2003. He has been a Trustee of the Liverpool Cathedral Foundation since 2004, and is excited at the progress of the Centenary Appeal.
He is a Director of the Park Prepayments Trustee Company Limited and was a Director of Miton Group plc between 2014-2019.
Living in Caldy with his wife Shirley Jim is a passionate country man, he loves shooting and fishing as well as most sports. He is a lifelong supporter of LFC.
Jim Davies was commissioned as a Deputy Lieutenant of Merseyside in 2010 and was awarded an OBE in the 2015 New Years' Honours List for services to Charity and the Community in Merseyside. He was the High Sheriff of Merseyside 2016.