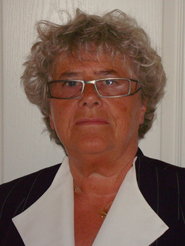 Mrs Jane Dearden MBE DL
Jane Dearden has been involved with charity work and fundraising since her teenage years and in 1967 was instrumental in setting up the St Helens Spina Bifida and Hydrocephalus Society, which still exists today.  She has been an active member of the Ladies Circle and Ladies Tangent organizations and is a keen supporter of all local community activities.

Between 1989 and 1997, through personal experience, Jane Dearden gained first hand knowledge of the needs of carers and those that they care for, and has since sought to influence local service providers to keep carers' issues high on their agendas.

In 2001 she established the Princess Royal Trust Carers Centre in St Helens and serves as Chair of the Board of Trustees.

Jane Dearden is Vice-Chair of Crossroads Care North West, Chair of Carers UK, and of Caring Together.  She was appointed a Deputy Lieutenant in January 2009 and was awarded an MBE in the Queen’s Birthday Honours in 2010.