The Earl of Derby DL 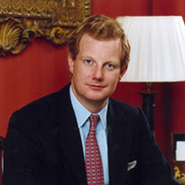 The Earl of Derby DL
Lord Derby (Edward) was born on 10th October 1962. Continuing a long family tradition, he was educated at Eton and was then commissioned into the Grenadier Guards (1981 – 1985) before attending the Royal Agricultural College, Cirencester. In November 1994, he succeeded his uncle as the 19th Earl of Derby and in the following October married the Hon. Caroline Neville, daughter of The Lord Braybrooke. They have three children: Henrietta, Edward and Oliver.

He joined Robert Fleming and Co Ltd in 1987 where he worked in the private client investment management business and became Head of Private Banking. He still spends some time in London, where he continues his investment banking interests on a part-time basis, as Chairman of Fleming Family and Partners Trustee Company Limited. Most of his time is spent running the Knowsley Estate which is part agricultural and part commercial.  It also includes Knowsley Safari Park, with over 500,000 visitors each year; and Knowsley Hall, which is rapidly becoming one of the best known stately homes for its event business. In 2007 Knowsley opened the longest and highest continuous belay aerial walkway in Europe as a new attraction adjacent to the Safari Park.  During Liverpool’s Capital of Culture year Knowsley Hall became the first stately home and Liverpool’s first establishment to be awarded 5 Star status.

Lord Derby was appointed a Deputy Lieutenant of Merseyside in 1999 and has become increasingly involved in recent years with some 100 organisations predominantly in the North West. In 2008 he was made an honorary Doctor of Laws by University of Liverpool and in 2009 he was awarded an honorary Doctor of Business Administration degree by University of Chester; he is their first and only DBA.

In addition, he is Life President of the Rugby Football League; a Director of Haydock Park Racecourse and a Trustee of the Aintree Racecourse Charitable Trust. His golfing interests are reflected in his Presidency of the Formby and Royal Lytham & St. Anne’s Golf Clubs and his Vice-Presidency of The Professional Golfers’Association.

His extensive list of patronages reflects on the one hand, the centuries-long ties his Family has with this area and, on the other, his interest in some of the smaller, local charities in the more deprived parts of Merseyside.

Most recently (2015) Lord Derby has been appointed by Her Majesty The Queen as an Honorary Commander in the Royal Naval Reserve.  It is thought to be the first time in 20 years that Liverpool has had an Honorary Royal Navy officer.

Aside from his young family, Lord Derby enjoys food, wine and sport, and pursues an active interest in racing with his Stanley House Stud in Newmarket, and a great mare, Ouija Board, who was twice Horse of the Year. In 2007 he published his first book, Ouija Board, A Mare in a Million and has horses in training with Ed Dunlop, Sir Mark Prescott and Michael Bell.