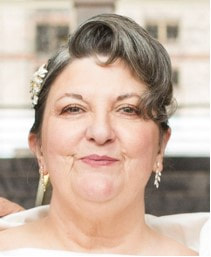 Canon Ruth Fabby
Since 1983 Ruth has been working in the arts, attending Liverpool Theatre School training in dance, mime and theatre skills. She completed further training at Creative Arts School in Sydney, Australia, becoming tutor for two years. Upon returning to the UK, Ruth became involved in disability and deaf arts as an artist and social activist.  As a deaf person she has faced many barriers and prejudices, so coming across the wonderful and delightful world in 1995 transformed her thinking, aspirations and art practices.

Ruth became an Artistic Director with a disability arts charity involved in creating opportunities for others, founding DaDaFest in 2001, a festival shaped and led by the lived experience of disability and deaf cultures. The festival has gone from strength to strength and impacted thinking around access, inclusion and programming, reflecting all people through cross arts form activities that have helped to reposition disabled people as valued and contributing members of society.

In the last few years, Ruth has gained a Masters in Art in Social Enterprise and Cultural Management, travelled to India, Malawi and South Africa as part of the Winston Churchill Memorial Trust and has since become a Travel Fellow.   Ruth was collated as an Honorary Canon with Liverpool Cathedral on 2nd October 2016.  Ruth remarried in October 2019 at Liverpool Anglican Cathedral – hence the name change.

She was commissioned as a Deputy Lieutenant in Merseyside in 2015, and in the Queen’s Birthday Honours List 2016, was
appointed to the Most Excellent Order of the British Empire as a Member (MBE)