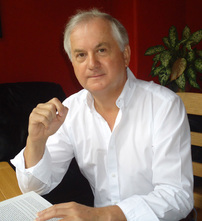 Mr John Flamson OBE DL
John took early retirement in April 2014.  He was one of the senior directors of the University of Liverpool from 2008, linking it with international, political and business market places.  He has BA (Honours) Geography and Master of Civic Design degrees and is a Fellow of the Chartered Management Institute and a Member of the Royal Town Planning Institute.

He started his professional life as a town planner and his planning career included posts with West Lancashire District Council, Merseyside County Council, Liverpool City Council and Merseyside Development Corporation, involving him in numerous regeneration initiatives in testing political and economic environments in the 1970s and 1980s. During his time with MDC he contributed to the re-emergence of the Merseyside waterfronts as commercial and visitor destinations and the image-changing iconic developments at Albert Dock and the International Garden Festival.  His work in the 1990s focused on city centre development, economic growth and public policy, as Director of Liverpool City Challenge, Chief Executive of Wigan Borough Partnership and a Deputy Regional Director of Government Office for the North West, where he oversaw the huge European investments into Merseyside from 2000, which continue to have a significant impact on the area’s renaissance.

He has been active in various non-executive roles over the years in the housing, charity, arts, education and environmental sectors and his current positions relate to Merseyside Buildings Preservation Trust,  the University of Liverpool’s Heseltine institute for Public Policy, Practice & Place and Liverpool City Region Combined Authority’s Investment Panel.

He lives in south Liverpool with his wife Jean.  They have a daughter Sarah, who lives with her husband Seán and three daughters Ruby, Heidi and Robyn in Kilkenny, Ireland, requiring regular trips to the Emerald Isle for family, fun and philosophy.  John is an avid Liverpool FC supporter and was a keen amateur footballer turning out for Convocation FC during the five decades from the 1970s to the teens and he is now trying his hand at golf with the same aspiration and delusion with which he played football.

He was instituted as an Honorary Fellow of Liverpool John Moores University in July 2011 and awarded an OBE in the New Year’s Honours List 2015 for services to business and the community of Liverpool.