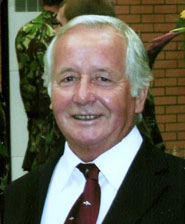 In 1985 he was promoted to Lieutenant Colonel on becoming Officer Commanding, North West Division Specialist Training Team.  In the same year was appointed MBE in the Queen's Birthday Honours list.  In 1989 he was appointed Commanding Officer of Liverpool University Officers' Training Corps and on completion of his command he was promoted to Colonel, becoming Deputy Commander of 42 North West Brigade at Fulwood Barracks Preston until 1995 when his active service was completed.

Since leaving the Army Joe has been very active in a variety of voluntary appointments.  He is a Trustee of the Altcar Ranges, a member of Liverpool University Military Education Committee, President of both the Liverpool Branch and the North West and North Wales Region of the Parachute Regimental Association, Army Patron of the Alexandrians (a fund raising group for SSAFA Forces Help, a services charity) and the 103 Regt RA Home Defence Association.  Until recently (March 2011) he was Vice Chairman and Board Member of the Reserve Forces and Cadets Association (RFCA) for the North West of England and the Isle of Man.

In 2006 he was appointed a Deputy Lieutenant in the County of Merseyside.

In civilian life, though now retired from full time employment, he is Chairman of Trustees of ATO, a Youth Vocational Training Company.  This is a charity helping young people gain vocational qualifications and employment.  He was also a member of the Initial Policy and planning Group for the Government's new youth programme, 'National Citizens Service'.

Joe's family are now nearly all now domiciled in St Ives in Cornwall.  His hobbies are cycling, downhill skiing and mountain walking.