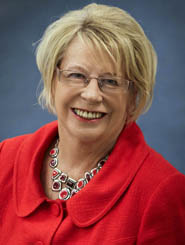 Angela Jones is a proud scouser who went to St Edmunds College and then trained as a teacher.

Her final post was as an LEA adviser for Personal, Social and Health Education. In 1992 she became a Non-Executive Director for Liverpool Family Services Authority, went on to sit on the Liverpool Health Authority board and was subsequently appointed Chair of what is today known as Liverpool Heart and Chest Hospital Trust.

In January 2001, on the day of the publication of the Redfern Report on organ retention Angela became Chair of Alder Hey Children's Hospital Trust. This involved rebuilding relationships with families, staff and the wider community under the relentless scrutiny of the media spotlight. Also during this time the Trust started the plans for the new hospital in the park and achieved Foundation Trust status.

After stepping down from the role in 2011 Angela was very proud to be awarded the post of 'Honorary Past Chair', enabling her to 'continue to champion the fantastic work of all the staff, governors, families and volunteers'.  Angela was awarded an OBE for 'services to health in Liverpool', and an Honorary Doctorate from Edge Hill University.

In addition to her work at Alder Hey Angela has also been Chair of the Merseyside 'Brook Advisory Centre', sexual health young people and he was also a Samaritan for 13 years, charing the Merseyside branch for 2.

Currently she is Chair of the Health Equalities Group (formerly known as Heart of Mersey) and a Trustee for pioneering health and social care organisation PSS, Ronald McDonald House, Alder Hey and also a project which supports Kanti Children's Hospital in Nepal. Recently she was invited to join the Board of Regents at Hope University.

In her spare time, Angela enjoys the arts, travel, keeping up with the political scene and putting the world to rights with family and friends around the dinner table.