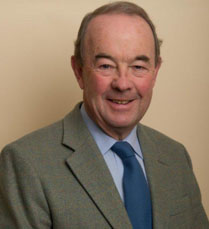 ​Nigel Lanceley was born in Nairobi, Kenya in 1949 and returned to Cheshire in 1951. His father’s family was from Wallasey and his mother was from Chester.  He was educated at Kingsmead School, Hoylake and Stonyhurst College.

He qualified as a Chartered Accountant in Liverpool in 1972.  He spent three years in accountancy before he joined Rensburg & Co. in December 1975. He then worked for a sister company before moving to London in 1986 as a result of a merger prior to the changes brought in by what was called ‘Big Bang’. He spent 8 years in the City, the last years as Director of Financial Control for the Union Bank of Switzerland.

Nigel returned to Liverpool in 1994 and re-joined Rensburg where he worked until his retirement in January 2016. He was Group Compliance Officer for 5 years, Senior Regional Director and Chairman of the company pension scheme until July 2015.

Nigel took over the Chairmanship of Local Solutions in 2014 and is also Chairman of North West Cancer Research.

His interests are all sports (especially golf), skiing and snowshoeing, walking, beekeeping and grandchildren.  In 2012 Nigel was a volunteer at the London Olympics and in the same year cycled from Lands End to John O’Groats for charity. He also has stories to tell about the Cresta run.

He is a member of The Voluntary Aid Club and Liverpool 41 Club where he was Chairman in 2003/4 and Treasurer since 1995.