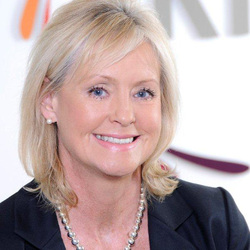 Ms Lesley Martin-Wright JP DL
Lesley Martin Wright was born in Corbridge, Northumberland.  She was then brought up in Newcastle upon Tyne, where she attended a local grammar school, then Newcastle Polytechnic (now University of Northumbria), living in the North East until she left to work in Singapore.

Ms Martin-Wright has worked in Newcastle, Singapore, London and now in Merseyside.  She began her career first in local government then changed direction into sales and marketing.  After 12 months in the Far East, she spent 10 years working in London for ‘blue chip’ companies.  Next, in 1989 she came to Merseyside working for a local company before beginning her own consultancy.  After a successful time in this role, she was approached by one of her clients, a commercial law firm, to work for them full time and again a change of direction resulted.  After 10 years, the post of Chief Executive of Knowsley Chamber of Commerce became vacant and in 2010 she took on the appointment.

Ms Martin-Wright believes that the Chamber brand has an international reach and reputation.  It is a non-political organisation, and represents businesses across all sectors.  Members include sole traders, charities, not-for-profit organisations, small to medium sized businesses, and large international and public companies.  The Chamber is recognised by all stakeholders as the ‘Voice for Business’ being both independent and membership driven.  Her work includes delivering proactive business support and guidance to new, growing and established businesses.  In October 2016, she was appointed by Head of Business Growth and Inward Investment at Knowsley Council; this innovative public/private partnership enables businesses to access the full range of business support and advice through a single gateway.

Lesley Martin Wright has two adult children, both of whom were born in London.  Their education began at Merchant Taylors’ Schools Crosby and they both went on to obtain degrees from Liverpool University.  Ms Martin-Wright was the Chair of the Merchant Taylors’ Girls School’s Parents Association for several years whilst her daughter attended the school, and then served on the School’s Governing Board for seven years until March 2019.

Ms Martin-Wright is a non-executive Director of the Merseyside Special Investment Fund.  Ms Martin-Wright is a Dame of the Order of Military and Hospitaller Order of St Lazarus. In 1993, she became one of the youngest magistrates ever to be appointed in the county.  She remains a magistrate.  In September 2016, she was appointed onto the Board of Trustees of the PH Holt Foundation.  The Foundation provides grants to small and medium sized charities which have the capacity to change lives and to develop flourishing communities across Merseyside.

In 2017 Ms Martin-Wright became Honorary Colonel of 156 Regiment Royal Logistic Corps.  156 Regiment is formed of 5 Squadrons spread over the North West but the history of the Regiment can be traced back to the formation of the Army Reserve in 1908.

Lesley Martin-Wright was commissioned as a Deputy Lieutenant in May 2014.