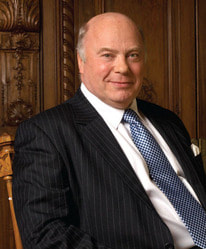 Mr McDonnell, who trained as a chartered accountant, has spent virtually his entire career with Grant Thornton, both in the UK and with the wider, global  organisation. In 1989 he was appointed as the national managing partner of  the UK firm, a position he held for some 12 years. He was chairman of the  supervisory board for the firm, divisional director for Europe, Middle East and  Africa and chairman of the international board of Grant Thornton International.  In 2001 he was appointed global chief executive officer, a position he held until the end of 2009.

He is heavily involved in both the community and business world in  Merseyside. Serving on a number of company Boards, Mr McDonnell has been involved in a wide range of activities, amongst most notable being his service as chairman of  the Merseyside Society for Deaf People and subsequently chairman of National  Museums Liverpool. He has also served as President of the Council of the University of Liverpool.