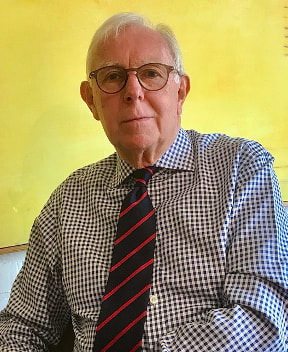 Robert T H Owen JP DL
Robert Owen was the High Sheriff of Merseyside for 2015-16.  He was appointed Vice Lord-Lieutenant in December 2018.

​He was born in Liverpool in 1949. He was educated at Booker Avenue School, Quarry Bank High School and Liverpool Polytechnic where he obtained a Diploma in Architecture in 1973.

Robert Owen was a founding partner, in 1980, of Owen Ellis Architects and, prior to retirement in April 2012, was one of four directors of the practice which has specialisms in Social Housing, Further and Higher Education, Commercial and Retail Development, the Health and Care Home Sectors and Rail Infrastructure. The practice gained extensive experience of working with charitable bodies and a range of religious denominations.

In April 2012 Robert took up a post as a lay chair of Fitness to Practise panels in London, Edinburgh, Cardiff and Belfast for the Nursing and Midwifery Council.

He has served as a magistrate on the Liverpool bench since his appointment as a Justice of the Peace in 1980 and from 2004 was Chair of the bench’s Youth Panel for five years.

In 2003 he became a trustee of a charity, Local Solutions, and has been Chairman of its Board of Trustees since 2006. The charity, which is based in Liverpool, employs nearly 1,200 people and has a turnover in excess of £19m. Robert was commissioned as a Deputy Lieutenant of Merseyside in early 2013.

He has played an active role in a wide range of organisations, mainly on Merseyside, including;

Robert’s main leisure pursuits are golf, craft woodwork, gardening and watercolour and acrylic painting.  He has been a Liverpool FC season ticket holder since 1970.