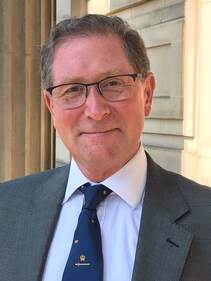 Edward Perry was commissioned as a Deputy Lieutenant in April 2019.

Edward was born in Northumberland and educated at Ampleforth College in North Yorkshire. He spent a year considering a career in the wine trade working in Porto and Paris before joining the Army being commissioned from Sandhurst in 1982 into the Coldstream Guards in 1982. He served in Germany, Belize, Kenya, N. Ireland and Cyprus as well as carrying out public duties in London.

Edward left the Army as a Captain in 1989 and ran a printing company in London for two years before embarking on a career in the heritage sector.  A postgraduate diploma at London University in Heritage and Environmental Education, three years as education officer at an experimental archaeology site in Hampshire and work with the National Trust and regional museums provided a good foundation for subsequent roles managing historic houses, firstly Ingatestone Hall, Essex and then Kelmarsh Hall, Northamptonshire. During the winters at Ingatestone, Edward worked in Whitehall for the Royal United Services Institute organising international conferences.

Edward is married to Karen and they have three children, Charles, Tilly and Eleanor.  In 2005 they all moved from Leicestershire to Merseyside when Edward was appointed General Manager of Knowsley Hall.  In 2008 he took on the management of the Safari Park and so, now as Managing Director and working closely with Lord and Lady Derby, Edward has the privileged and diverse responsibility of leading the teams in one of Britain’s magnificent stately homes and one of the five UK safari parks.