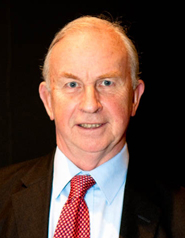 Geoffrey Piper
Geoffrey Per was commissioned as a Deputy Lieutenant in 1993.


Geoffrey has also been involved with numerous regional and sub-regional organisations in the North West.  He was Chairman of Business Opportunities on Merseyside from 1987 to 1993 and became a Founder Director of The Mersey Partnership in 1993. He represented the private sector on both the Objective One (Merseyside)  and Objective Two (Greater Manchester, Lancashire and Cheshire) European Structural Fund Monitoring Committees and, from 2003 until 2008, chaired the North West  Review and Scrutiny Committee established under the Regional Development Agencies Act. He served as a Deputy Chair of the Greater Merseyside Learning and Skills Council and as the Chair of the North West's 2012 Olympics Business Forum. He was also the Non-Executive Chairman of Coral Products plc, Haydock, from 2006 to 2011.
Geoffrey and his wife Sue live at Parkgate. They have four adult children and, at the last count, ten grandchildren.