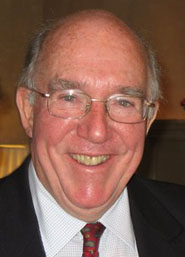 Michael S Potts Esq DL
Michael Potts was appointed a Deputy Lieutenant in 2000 and became High Sheriff of Merseyside in 2006-7.

He is a Chartered Accountant who came to Merseyside in 1970 to take up the appointment as Senior Partner of the Liverpool office of Coopers and Lybrand (now known as PwC). He had previously worked for the firm in London and Dublin. He retired from the firm in 1992.

He served as a non executive director for 6 years to the Mersey Regional Ambulance Service (NHS Trust) and a number of other companies based in Merseyside. He became a director of the Universities Superannuation Scheme in 1999 and retired in 2007.  He had extensive involvement with the Institute of Chartered Accountants in England and Wales throughout his professional career. He was President of the Liverpool Society of Chartered Accountants in 1982/83. He became a member of the Institute Council in 1988 and served for 4 years prior to retirement.

Michael Potts was an active member of the Council of the Liverpool Chamber of Commerce from 1974 until 1992, serving as Treasurer from 1974 to 1982.

His service to the University of Liverpool started in 1979 as a lay member of the Council and ended in 2006 on his retirement as Pro-Chancellor. He received an Honorary Degree from the university in 2007.

He was appointed a General Commissioner for Income Tax in 1993.

Michael Potts' leisure interests have included golf, sailing, vintage motoring and horology.  He was Commodore of the Dee Sailing Club in 1981/82 and is currently a Vice-President of the club. He was Treasurer of Royal Liverpool Golf Club for 4 years between 1992 and 1996.  He is a member of the Artists Club and a liveryman of the Worshipful Company of Clockmakers and the Worshipful Company of Chartered Accountants.  He is the author of a book entitled “Potts of Leeds, Five Generations of Clockmaking” published by Mayfield Books in 2006.

He is married and lives in Parkgate. He and his wife have three sons and five grandchildren.