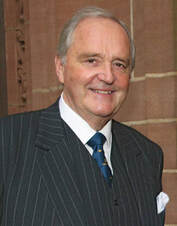 David Steer QC DL was appointed a Deputy Lieutenant in 2016 and was the High Sheriff of Merseyside 2019-20.

He was Called to the Bar by the Honourable Society of Middle Temple in 1974 and joined the chambers of A.D. Pappworth in Liverpool. He practised exclusively in crime, both prosecuting and defending. He was appointed Assistant Recorder in 1987 and Recorder in 1991.  Throughout the eighties and early nineties he was the legal adviser to successive Chief Constables of Merseyside at police disciplinary hearings.

David became Head of Chambers (7 Harrington Street Chambers) in 1992 and remained so until 2011.  He was appointed Queen’s Counsel in 1993.

As an elected member of the General Council of the Bar he served on the Professional Conduct Committee from 1995 to 1997.

David was Called to the Bench by the Honourable Society of Middle Temple in 2002 and was the Leader of the Northern Circuit of the Bar for three years from 2002 to 2004 inclusive. Once again he served as a member of the General Council of the Bar throughout that period. He retired from practice in 2012.

David’s interests include gardening, horse riding, tending a small acreage and supporting St Helens Rugby League Club.  He is Chair of the Board of Trustees of Merseyside Scouts.  David married Elizabeth in 1974 and they have one son, Oliver.