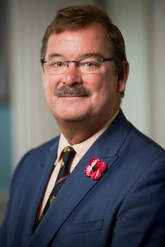 From a military family and having Manx parents, Colonel Underhill completed 10 years of schooling as a boarder at King William’s College in the Isle of Man in 1978. He was commissioned from RMA Sandhurst in April 1979.  After attending the Royal Corps of Transport Troop Commanders course he was posted to Hong Kong (the first of 3 tours) to The Gurkha Transport Regiment (GTR) as a troop commander in the Chinese squadron (Hong Kong Military Service Corps).  He then completed the Regular Careers Course at RMAS and was posted to the Junior Leaders Regiment in Colerne, Wiltshire.  In July 1984 he was posted to the nuclear re-supply regiment, 8 Regiment RCT based in Munster, Germany.  During his tour he spent 7 months on attachment with the Queen’s Royal Irish Hussars as a troop leader and for the last 3 months was appointed a squadron second-in-command.  After completing Junior Command & Staff Course he was posted in 1986 to Cyprus as the adjutant of 30 Regiment RCT.

From 1988-1990 he worked in the United Kingdom Mobile Force, based in Tidworth, Wiltshire as the SO3 G4 Movements.  In September 1990 he returned to Hong Kong and commanded 28 Squadron GTR, a Gurkha squadron.  During the latter part of this tour, he formed 34(UNFICYP) Transport Squadron, consisting of 134 British, Gurkha and Chinese soldiers and spent 6 months with the UN in Nicosia, Cyprus.  He was then posted to HQ 1(UK) Armoured Division into a new post of SO2 G3 New Management Strategy.  In 1994 he went back to Hong Kong and became Second in Command of the newly formed Logistic Support Regiment (known as the 1000 day regiment).  He left Hong Kong in December 1996. Three years then followed at the MOD Main Building within the Directorate of Overseas Military Activity where he was the personnel officer for all tri-Service personnel on loan to different countries around the world.  Moving within the Directorate on promotion, he became the SO1 project officer for the formation of the tri-Service International Military Advisory and Training Team (Sierra Leone) and then completed 4 months on attachment to DfID as the military representative in the Prime Ministers Partnership for Africa team.  Appointed an MBE in the Queens’ Birthday Honours list 2000, he was posted to the Defence Transport and Movements Agency in Andover as the SO1 Operations & Plans responsible for the sourcing, allocating and tasking of all operational strategic modes of transport.  At the completion of this 3 year tour, he was appointed the OBE in the Operation TELIC honours list and subsequently moved to HQ London District where for 3½ years he held the appointment of Commander Logistic Support.  Selected for promotion to colonel in 2006 he assumed the appointment of Commander The Royal Logistic Corps Territorial Army from April 2007 until March 2010.  He then assumed the new appointment of Assistant Head Operational Energy Management, Defence Fuels Group in March 2010 until March 2011.  He then held the appointment of Command Logistic Support & Infrastructure for HQ 4th Division in Aldershot until December 2011 and in January 2012, he assumed the new appointment of Assistant Chief of Staff Support in the newly formed Headquarters Support Command in Aldershot until April 2013.
​
He is currently the Honorary Colonel for 158 Regiment The Royal Logistic Corps, a Trustee for the Hong Kong Locally Employer Personnel Trust and President of the Movement Control Warrant Officers Dinner Club. Married to Debbie, he has 2 boys; the eldest spent 5 years in the Army (Royal Engineers) and now works for Hydro Industries based in Wales.  The youngest, having studied Disaster Management & Emergency Planning, is working for Surrey County Council as an emergency planner manager.

Colonel Underhill has held a variety of sporting appointments/positions: Secretary of Hong Kong British Forces (Combined Services) Rugby 1980/81, Skipper UK RCT RUFC 1983/84 & Skipper BAOR RCT RUFC 1985/86.  At the end of the Rugby World Cup in 2015 he handed over his appointment on the Army Rugby Union (ARU) Management Board/Council as a Trustee) which he had held for 10 years as well as being the Army representative on the RFU Council at Twickenham and Chairman of Discipline & Governance for the ARU for 7 years.  He was appointed an Honorary Life President of the ARU in September 2016. Cricket is another passion.  In his younger days he undertook motorcycle display work riding and managing the 29 Squadron RCT Motor Cycle Display Team from 1979-82 and The Hong Kong Logistic Support Regiment Motor Cycle Display Team 1994-1996 where he performed at the Royal Military Edinburgh Tattoo in 1981 and the last ever Royal Tournament in 1996.
Colonel Underhill commenced his new appointment as Chief Executive NW RFCA in April 2013.